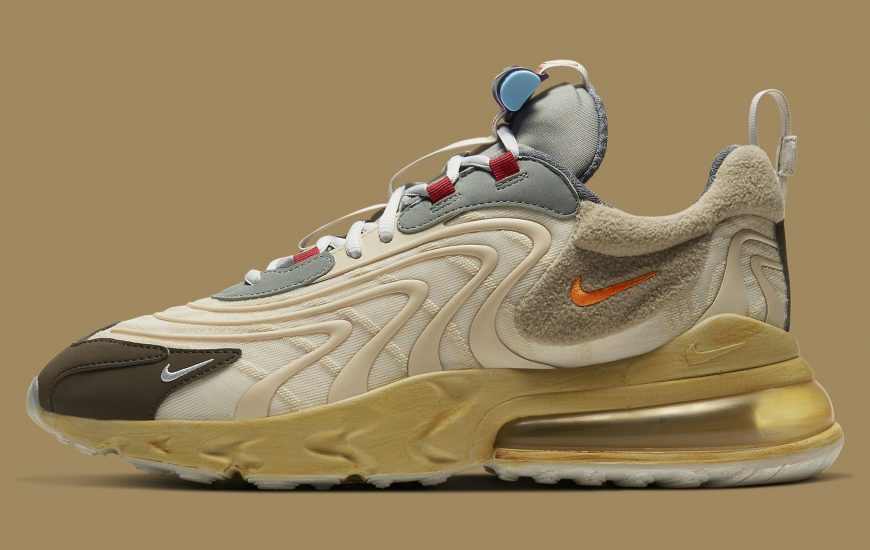 Travis Scott collaboration with Nike has been fire back to back as they set to release a new collab dubbed Travis Scott x Nike Air Max 270 React Cactus Trails. The rumour has been going around for a while now and now you have it, another clean one from Travis. The designers of this pair added extra striping to its body and gotten rid of the dominant Swoosh usually found on its midfoot.

The colourway itself, though, is more representative of classic aesthetics as cream tones run the base construction while hits of red, purple, aqua blue, and brown mark elsewhere. The Toolings, whose look is by and large the clearest in intentions, are given a sulfur dye treatment that aims to mimic an object’s patina just as the oxidation achieves above. Orange and white embroidered swooshes then subtly accent the back profile and forefoot, respectively, while custom lace locks, tongue tabs, and polar fleece collars add amenities quietly throughout.

Take a look at the pair images below and decide if you would buy a pair when it eventually drops. Release date is May 29, 2020, Save the date.

If you need a pair after it drops, we got you covered! Always check our website daily for updates.